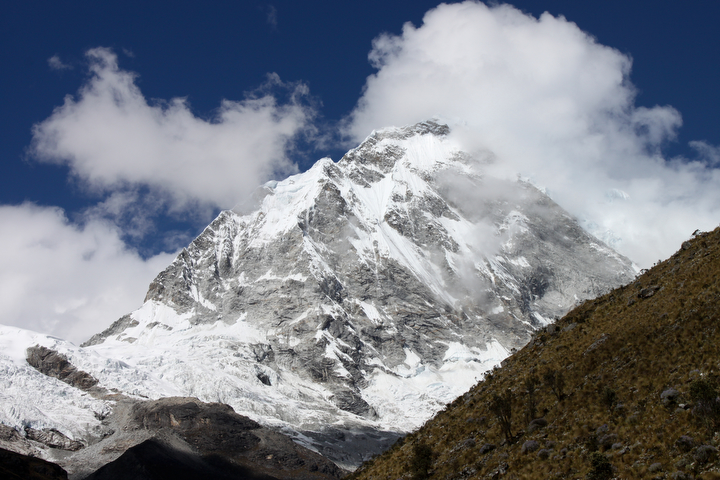 Dominant and powerful like its namesake, Huáscar, the 16th century Inca emperor, the mountain’s significance throughout history is undeniable. Especially undeniable is Huascarán’s impact on the local area in recent years. On 11th January 1962, a massive landslide of rocks and ice buried several towns and villages and killed over 4,000 people in the hills below. Tragedy struck again on 31st May 1970 when a 7.9-magnitude earthquake (known as the Great Peruvian Earthquake) provoked the world’s worst ever avalanche, once again burying entire towns under ice, rock, mud and debris, and taking over 20,000 lives. It’s estimated that the avalanche, which ripped through 11 miles of hillside on its decent, travelled at speeds of up to 210 miles per hour (335 km per hour). The towns of Yungay and Ranrahirca, as well as many other settlements, have never fully recovered.

When Huascarán isn’t striking fear into the hearts of locals, it also has a fun side as shown by the “Social Climbers”, a group of 8 amateur mountaineers, who held in 1989 what is recognised by the Guinness Book of Records as the world’s highest ever dinner party.

Today, without incident for over 40 years, the mountain holds steady and remains a huge dominating feature of the central Cordillera Blanca. It takes a number of days to climb, usually being approached from the West, but it rewards those with the stamina and commitment with the two highest summits in Peru.

As well as being a brilliant and challenging multi-day climb it also continues to intrigue. In 2013, a leading study determined it as the place on the Earth with the smallest gravitation pull, due to its height and proximity to the equator. There is only one way to feel this lightness for yourself!