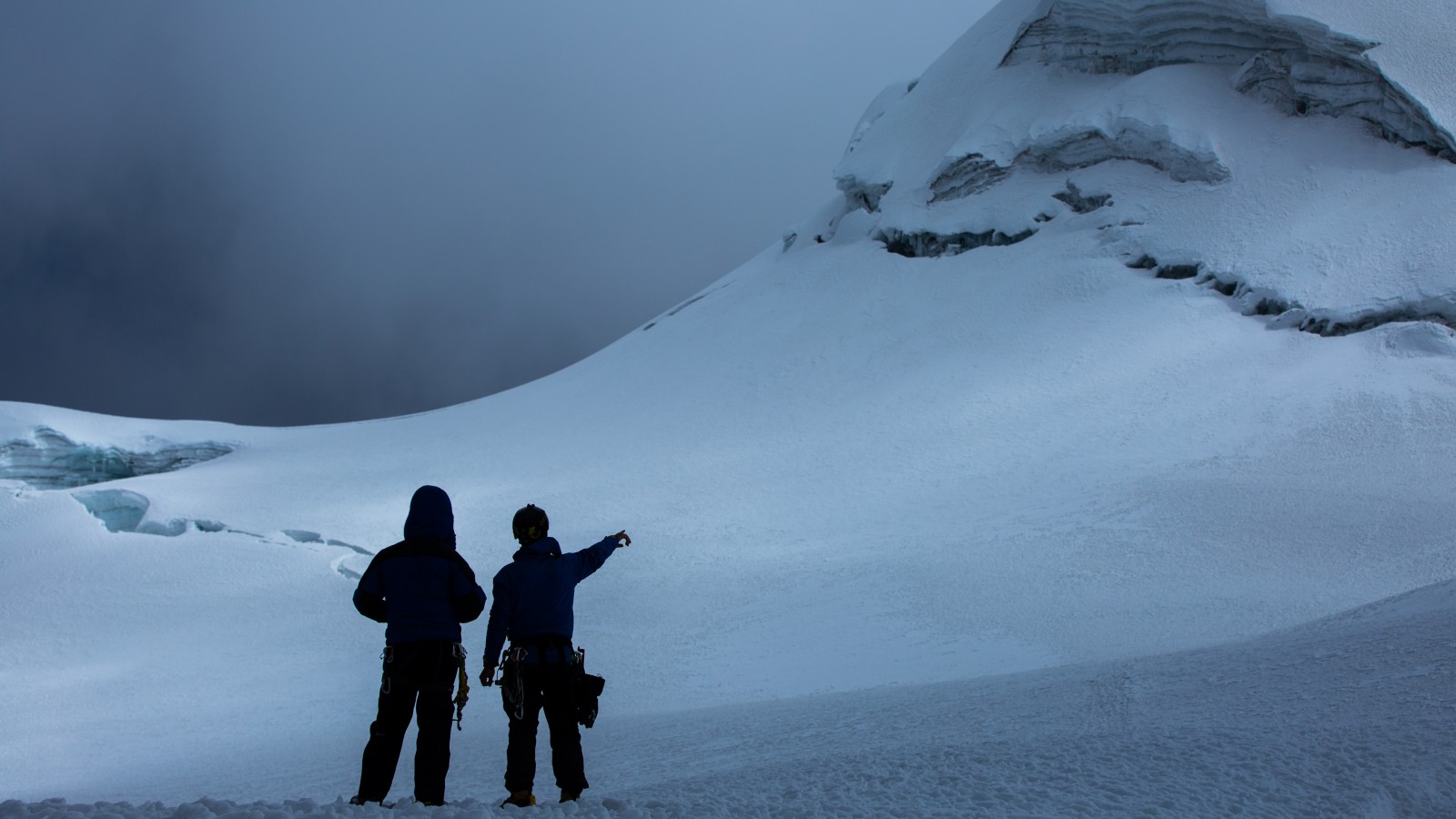 Huarapasca is similar in technical difficulty to Yanapacha but with an easier approach in an almost unvisited part of the range – bar a bus of tourists heading over to the Pastoruri glacier.

Many of the valleys in the Cordillera Blanca are aptly called quebradas (for example, Quebrada Ulta or Llanganuco). Quebrada means ‘break’ in Spanish and that’s exactly how they appear; impressive violent fractures in what would be a continuous mass of icy heavens. They are most dramatic in the northern side of the range, like the deep Santa Cruz valley. Huarapasca however finds itself in the far south of the Cordillera. Here the landscape is much more open; though mountainous it has a free, rolling nature to its terrain. It’s a different place. The world’s largest colony of Puya Raimondi grows in these high hills. A tall spiky plant that only flowers once it reachers the ripe age of forty years! From the summit of Huarapasca you can gaze across to the Cordillera Huayash – the range where “Touching the Void” took place.

High camp is accessed within a few hours from Huaraz and only fifteen minutes approach hike from the drop-off point. I think this makes Huarapasca the most accessible peak in the Cordillera but somehow it feels more remote than any other.

Camp has all you want. Set on the shore of a small lake you have easy water access, a distant horizon disappearing towards the sunrise, and a great look at the first seven pitches of climbing (if you decide to pitch it out). The panoramic view also allows you to spot any approaching weather about two days off! This part of the range seems to be frequented a bit more often by thunderstorms… like once a month. A storm arrived a few hours after our climb and passed quickly, leaving us with a beautiful dusting of snow.

This is a very pleasant climb. You can get away with a fairly late start in the morning (aim for four or five). It’s less than half an hour to the glacier, from there the route steepens into five rope lengths of climbing up to a plateau. After some glacier travel you have two remaining pitches to the summit which gives it a dramatic ending. Have brunch at the summit – any excuse to sit and wonder at the view a little long. Abseil most of the route or, if confident, down-climb. Huaraspasca is a compact and exhilarating trip; perfect to challenge yourself with some steeper stuff and hone your skills if you’re fairly new. There’s also good slope to practice axe arrests. Equally it makes for a fun preparatory climb ahead of a more demanding objective if you have little time and wish to remain acclimatized.

If you decide to spend another night at camp after the climb then a morning pick up would still leave you time to try out some steep ice on a frozen waterfall just a few hundred yards from camp (best to attempt in the morning as it gets a bit drippy by afternoon).

Huaraspasca lies somehow undiscovered and is a solid choice for any Cordillera climbing itinerary. Make sure you choose it.

By Merlin Hetherington, May 2015