It is official.  My midlife crisis has just sky-rocketed to a whole new level.

The travel bug all started with a hiking trip to Kilimanjaro in 2010, and for quite some time after my idea of travelling consisted of a tick box exercise of the latest bucket list of things to do before the grand old age of 30.  Skydive in Australia. Tick. Hike the Inca trail. Tick. Spot the big five animals on safari. Tick.  Don’t get me wrong, all of these have been absolutely amazing. However, hitting the 30 milestone stirred a nagging curiosity to get off the beaten track and to see what other experiences travelling could bring.

It is easy to forget how fortunate I am to live in an age where booking a holiday is just a mouse click away and how we have the luxury of encountering new places and cultures pretty much anywhere in the world.  As habitual creatures however, I sometimes think that many of us fall into the trap of getting stuck in the same old routine of where to go, what to do, reluctant to push the boundaries of our own comfort zones.  Ironically it was in an EasyJet in-flight magazine where I read that “the real reward from travelling comes from stepping outside ourselves, our fixed views, beliefs and habits and experiencing the reality through the eyes of the locals or even those of our fellow travellers.”

With that in mind, I got home and booked my flight to Colombia.

Colombia, previously ranked as one of the most dangerous countries in the world and notoriously known for its drug wars and ongoing conflict, has worked incredibly hard to shake off this image.  In fact on the 23 August 2016, the day before I left to return to the UK, a historic peace agreement was signed between the government and left wing rebels, FARC after 52 years of conflict.  The war was over. 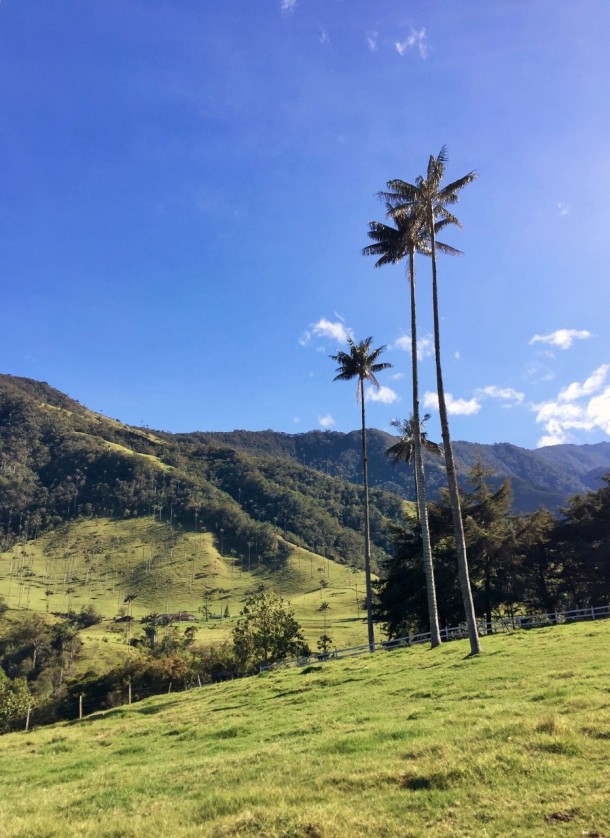 With large parts of the country still largely untouched, there is a huge appeal to travellers who are looking to avoid the tourist crowds of some of the other South American countries.  Medellin has spent substantial amounts of money redefining itself as an innovation and education hub, and from what I saw during my time there, I would argue that it is no more dangerous than any other big city, provided you keep your wits about you, listen to the locals on where to avoid and never ever “offer papaya!”*

After a spectacular approach flying over the mountains into José Maria Cordova airport, the first week in Colombia was an excursion to the Pacific coast for Humpback whale watching.  A quick turnaround of luggage in Medellin at the halfway point of the trip and I was off for part 2 to Salento, the Los Nevados National Park and Nevado del Tolima.

Having studied in great detail all the things suggested in Off The Beaten Track – Part 1, I took its advice, booked a horseback tour around Salento’s coffee farms and waterfalls and with that I fast trotted into the distance.  Rendezvous-ing with Mateo, our mountain guide for the trip, and the three other happy hikers that evening at Salento’s Mirador, it was time for some pizza carbo-loading and early to bed.  The next morning we headed to the town square where we loaded the local ‘Jeep Willies’ (ours was a shiny fire engine red), that would be our means of transport to the Valle de Cocora, famous for its towering but endangered Quindío wax palm trees.  By all accounts, these jeeps can supposedly hold up to 35 people, but I still remain to be convinced… 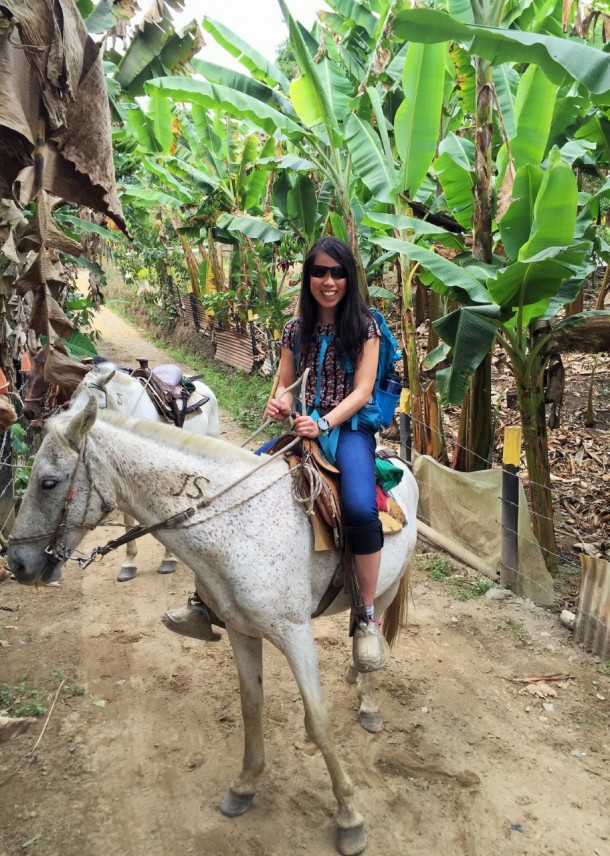 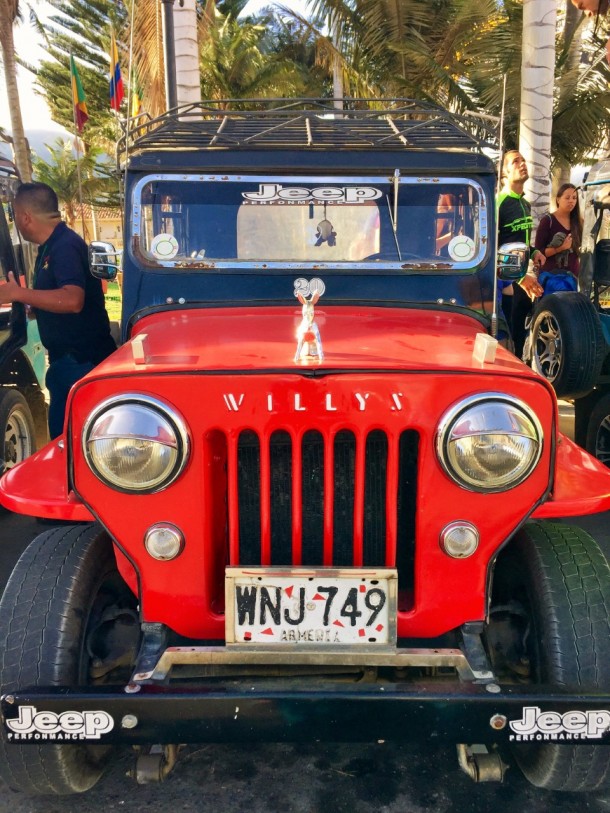 The 75km circuit starts out in fairly green, jungly vegetation, across rivers and rope bridges, before a fairly hefty and humid slog up some particularly muddy trails, levelling out to the spectacular sight of the páramo.  The second most biologically diverse country in the world with the ocean, jungle, plains, desert and mountains all on its doorstep, Colombia’s varied ecosystem is simply stunning.  It is known to have 66% of the world’s páramo ecosystem, a region above the continuous cloud line and below the snow line and covered by espeletia (or more commonly known as frailejón), endangered plants resembling sunflowers, that grow at a rate of approximately 1cm a year.  Looking out across the páramo, these plants span as far as the eye can see with some of these as high as 3 metres, signifying their existence for as much as 300 years.

After a lung-busting 8 hours, we make it to La Primavera, a farm owned by a local lady, and where I am introduced to the energy drink of the trip, ‘agua panela’, a sweet cane sugar drink designed to replace all the thousands of calories that we would be burning each day. 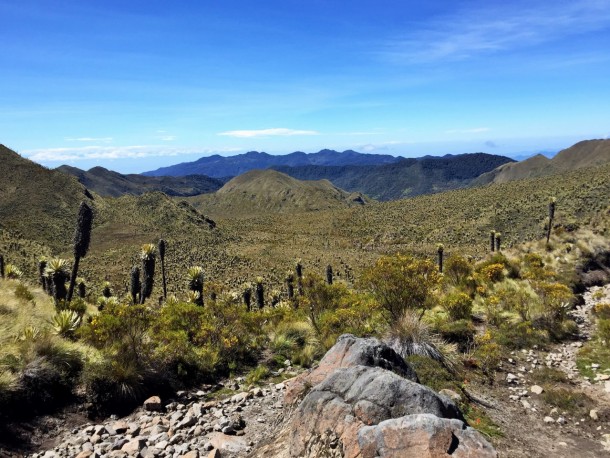 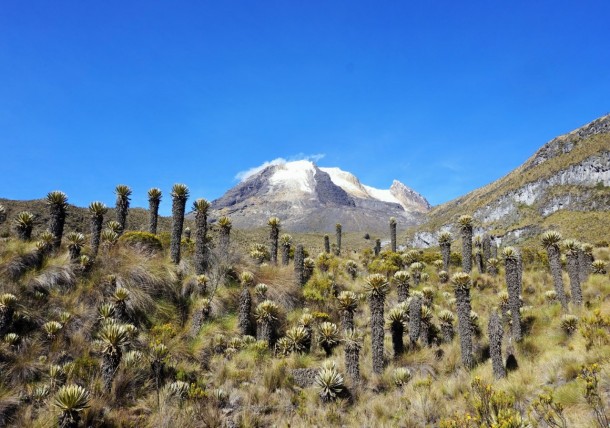 During the week, we camped at a combination of local farms as well as out in the open in the national park.  And without a doubt, camping under the milky way in the shadow of the volcano has got to be one of the greatest highlights of the trip (and quite possibly ever!) and is most definitely the way to do it.  On Sunday 21 August, with a sky full of stars, spirits were high for the 2am wake up for the Nevado del Tolima summit attempt as the group packed their kit.  Crampons. Check.  Ice axe. Check.  However the summit was not meant to be this time.  The attempt was curtailed due to dangerously strong winds and heavy fog and cloud setting in and, though disappointed, there was an overwhelming appreciation for a guide who knew exactly what he was doing.  It is easy to get carried away by the thrill of summits but mountaineering is as much about getting to the top as having the maturity and experience to know when turning back is also the right thing to do.  Leaving El Encanto lake, the volcano stood as a stark reminder that the mountain always has the last word… 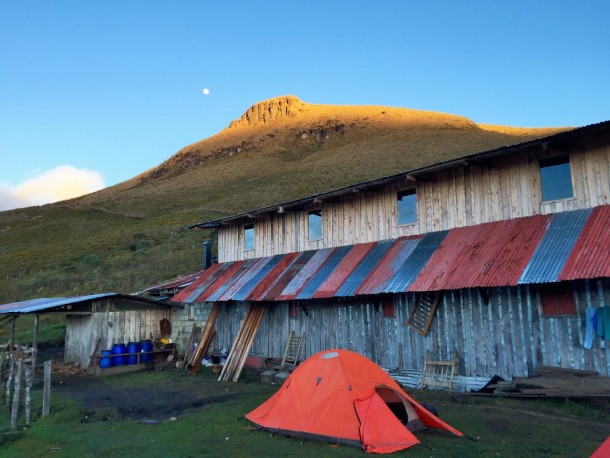 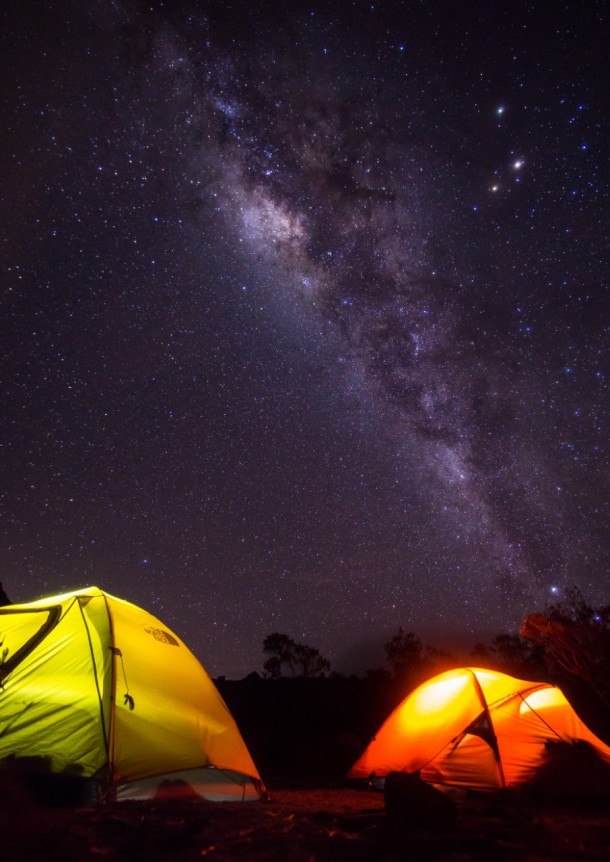 As we traversed across more of the páramo towards the Termales de Cañon, we still had one more treat in store.  Thermal hot springs!! Heated from the volcano, it provided welcome respite from the freezing cold, and an afternoon spent turning ourselves yellow from the sulphur, made for a thoroughly enjoyable experience!  A grueling 7 hour descent on the last day towards Ibagué, including a 400m ascent thrown in for good measure, and our 6 day circuit was complete.

All that was left was that much needed shower…

*’Offering papaya’ or ‘papaya dada, papaya partida’, a Colombian saying for ‘what is given can be taken’ and is used as an analogy to take care of your belongings and valuables.  If, for example you are walking down town with your bag open and mobile phone on display, you are effectively offering papaya…!